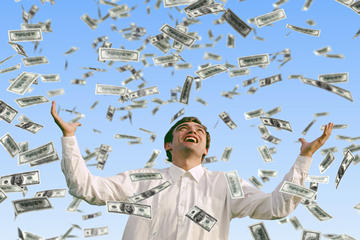 Not. 🙂  I wanted to set this straight before we get into the practical ways of Becoming Wealthy.

No, I haven’t won the lottery or received large inheritance, nor was I born Rich. I come from a middle class family as most of us do. It wasn’t an accident either, we planned for it almost eight years back. I had even shared this vision with some of you along the way, so it wasn’t a secret.

How did it all start?

I knew in my mid-twenties that I won’t be in corporate world forever but didn’t have a concrete plan. It was just a wishful thinking. Brinda also shared the same vision when I met her around that time. We thought it we would be nice to have a small orphanage in India at some point in our lives. So these little motivations got us thinking in the direction of making enough money to leave the corporate world.

Things really started moving in my late twenties as I had some idea on how to accomplish this goal. I planned to quit by the age of 38, magic number..huh :-). Now you will ask why 38?

Well, I was around 29-30 at that time. The goal seemed achievable, that if both of us work for another 8-10 years, we should be able to make it. Personally for me, 38 number was important as it gave me a couple of years cushion before I turn 40 (which didn’t seem too bad).  So there was some room, in case things didn’t work out as planned and we had to wait out a little longer.

But with Lord’s grace and guidance throughout, the plan worked so well that I became financially free ahead of time and quit my job at the tender (not so) age of 36. 🙂